Climate change has been a controversial and challenging issue in Australia and around the world affecting the way we live.  This essay will argue that climate change is a health issue in Australia.  The scope of this essay focuses on the social issue of Australian health and the risks of climate change implications on society. Because climate change is a whole other enormous subject; it is with intent not to investigate the structures involved in the causes of climate change. I will discuss the increases in injury and mortality from stress. I will also discuss the extreme weather condition that affect the social, economic and environmental surroundings in which we live deeply influence health as well as the social determinants of health.   Finally, I will discuss why “health promotion” is not just the responsibility of the health sector but goes beyond healthy lifestyles to well-being and better environments. Policy improvement is therefore the key to affect society consumption patterns to help enhance human health; and observably this is interconnected with the challenging environmental and ecological issues facing the world.

Climate change has been a controversial issue in Australia and around the world affecting the way we live. The recent IPCC (2013, p.10) report suggests “human influence on the climate system is clear”. I do believe the future of climate change is indeed the biggest long-term environmental challenge facing the earth and regrettably, the future generation will have to endure such upsetting environmental impact as well as social and economic consequences of what we, as humans have done.

I am aware that climate change is a subject that calls for analysis but that for the limited purposes of this essay I am going to focus only on the health impacts of climate change, the social dimension of these and the social structures involved in those impacts. Nevertheless, we should encourage people for an enduring “ecologically sustainability culture” that is progressively embraced worldwide to challenge greenhouse gases for a better world to reduce the impact on health and illness.

The definition of health and illness are rigorously linked to natural life factors that are facilitated by societal structures and actions. Health usually is influenced by class, gender, occupation, age group and culture.  Hence, the sociology of health is the study of social institutions and the relationships that concern health and their connections, like the active collaborations of institutions such as hospitals and other associated sectors .

Our understanding of what constitutes health has been controversial and much debated in particular climate change related risks.  Environmental and ecological related risks to the health of Australians will be significant and must be taken seriously.  The Department of Climate Change and Energy Efficiency (2007) has indicated that the risks impact by climate change include explosions in illness and mortality from stress and trauma such as heat-waves, floods, cyclones and bush-fires, and increased transmission of air-borne, food-borne and water-borne sicknesses. The types of health impacts according to The World Health Organization that changes in climatic settings can have direct impacts. Heat-waves associated stress will inevitably impact on health are consequences of changes to ecosystems and biological processes for examples mosquito-borne infections and agricultural food yields.  Importantly, there are various health consequences that follow when residents are displaced.   Plummer (2010, p. 207) describes the societal feared and haunted change of life settings from the familiar to the familiarized as a system of consciousness that were taken for granted; in this situation the enormous health impacts.

Health impacts owing to climate change will distress some areas, socioeconomic classes of individual and demographic groups more than others. Australian older people are more inclined to extremes of high temperature. Moreover, countless rural and isolated groups of people have less capacity than other settlements to deal with the health impacts of climate change. It is expected that whichever environmental boundary of mosquito-borne infections; are predicted to affect more on northern than southern Australian residents (DCCEF 2007).  Like other statistics, this prediction can be explained from the historical trends analysis by the Australian Bureau of Meteorology.

Australian Bureau of Meteorology (2013) has in the past 12 months recorded the average temperature across Australia for the period from the beginning of September 2012 to the end of August 2013 which was 22.92 °C. Precisely, it is 1.11 °C above the 1961–1990 average, higher than the previous record of +1.08 °C that take place between February 2005 and January 2006. Figure 1 below demonstrates Australia’s temperatures for January to August 2013 are also the warmest on record, at 1.13 °C exceeding the long-standing average, greater than the figure established in August 2005, which was Australia’s warmest year on record. The ABM (2013) documented the 12-month period as incomparable and has been characterized by prevailing high temperature across Australia. The average temperature has been above average over the whole continent, with no region recording below-average temperatures. 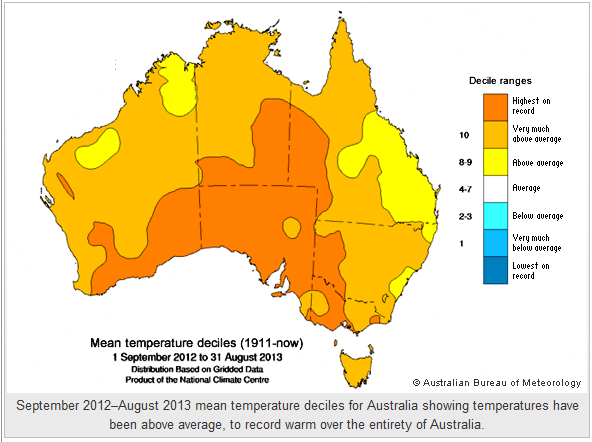 Hence, the recently “constructed” changing global environment will have serious “social problems” particularly for the underprivileged, and in due course weaken the growth and human progress of future generations given their inter-relatedness.   Ross Gittins (2012) in his remarkable article has highlighted that

A temperature increase of more than 2 degrees would alter precipitation patterns, increase glacier and permafrost melt, drive sea-level rise, worsen the intensity and frequency of extreme weather events such as heat waves, floods and hurricanes, and become the greatest driver of biodiversity loss.

Given these problems relative to climate change effects and illnesses, sociologists have noted there are factors that play a part in producing disease.   Social and community network of support, individual lifestyle factors and age, gender and legitimate factors; above all the wide-ranging structures of the society and the specific living environments are as important in identifying and understanding the foremost determinants of health as shown in Figure 2.

Figure 2 the main determinants of health.  Source: Adapted from (IPH 2010)

Comprehensive review and analysis have been presented and accessed by NHMRC’s (2011) concerning the prospect of climate-change and health consequences in Australia.  Climate-change effects and illnesses are expected to include “Heat-related deaths”, “Flood-related deaths and injuries”, “Mosquito-borne diseases”, “Water-borne diseases” and “Food-borne diseases.” Heat-related deaths could possibly double to 2,500 a year by 2020.  Warmer winters will mean present fewer annual losses of ‘winter deaths’ but these would be critical in the future by the incomparable heat-related deaths.  Flood-related deaths and injuries are more and more common and extreme weather events such as floods, droughts, storms and cyclones are expected to rise in Australia. Extreme rainfall is projected an appalling 240% upsurge in flood-related deaths and injuries in several regions. Increases in temperature and rainfall may cause the growth of tropical mosquito-borne illnesses such as that of NHMRC’s (2011) cited as “malaria, dengue fever, Australian encephalitis, Japanese encephalitis and epidemic poly-arthritis.” The quality and quantity of water for consumption could decrease in some regions because of drought and the rise of temperature. Thus, health ailments related to water pollution by “bacteria, viruses, protozoa and parasites” or organisms will escalate due to degradation of water quality.  Apparently, such pollution will likewise happen at the other weather extreme, as substantial rainfall and overflow cause infectious and contaminated resources to runoff from agricultural grounds and social septic systems.  WHO (2013) suggests food-borne diseases involve a wide scale of illnesses and are a mounting public health problem worldwide. Ingestion of contaminated of foodstuff may happen at any phase in the production process of food for consumption and can cause from pollution of drinking water, soil or the air we breathe.  Food-borne disease is triggered by a number of diverse viruses, worms, infectious bacteria and toxic parasites. Since bacteria reproduce more quickly at warmer or higher temperatures, it is possible that the amounts of food-borne diseases such as “gastroenteritis and hepatitis” will increase as normal temperatures intensified that impacted on health variance.

As demonstrated, the full picture of health variation is complicated but unintentional.  The social, economic and environmental surroundings as well as “life politics” of making our own individual decisions in which we live intensely influence health. These conditions are identified in understanding the social causes of health, and are therefore the outcomes of public health policy.  Studies suggest that historical developments in public health were primarily due to public health processes like improving “piped water, sewerage and better housing”, rather than improvements in medical success. The Bill & Melinda Gates Foundation are arguably respected as “major contributor to global health”.  This is important because it can mean an oversight of opportunities to improve public health.

The World Health Organization (2010) in their Adelaide Statement developed by contributors of the Health in All Policies International Meeting believes health is a progressive concept highlighting social and private resources, as well as physical capacities. Therefore, “health promotion” is not just the responsibility of the health sector but drives beyond healthy standard of living to well-being and compassionate environments.  WHO’s main intention of the meeting was to move the plan forward by pinpointing crucial values and pathways.   This is why their approach to optimizing the use of natural resources and upholding sustainability; contribute to action for health across all sectors of government, and engage the health sector in underwriting to the goals of other sectors.  Hence, health promotion is a key component of policy development to influence population consumption patterns, helps enhanced human health, and equally such attainment as linked closely to the ever challenging environmental and ecological issues.

In sum, climate change is a health issue in Australia. Environmental and ecological related risks to the health of Australians cannot be ignored and must be taken seriously.  Heat-waves associated stress is consequences of changes to ecosystems and biological processes and the various health consequences that follow when residents are displaced.   Australian older people are regrettably more prone to severe weather condition and as such numerous rural and remote groups of people are more disadvantaged to deal with the health impacts of climate change. Indeed, the ABM has documented an unmatched prevalent high temperature across Australia. Hence, the extreme weather condition will have serious consequences, largely for the underprivileged and needy, and in the end weaken the growth and human progress of future generations. The social, economic and environmental surroundings in which we live profoundly influence health. These conditions are identified as the social determinants of health, and are consequently the outcomes of public health policy. Research suggests that improvement in public health were primarily due to public health processes like improving “piped water, sewerage and better housing”. “Health promotion” is not just the responsibility of the health sector but pushes beyond healthy lifestyles to well-being and better environments. Policy development is for that reason key to influence society consumption patterns, that will help enhance human health; and naturally linked directly to the challenging environmental and ecological issues facing the world.

Development prospects and the Role of State

The author considers that the objectives of economic development and sustainable growth are mutually reinforcing because the term sustainability reflects the need for cautious sense of balance between economic growth and environmental protection. The present Governments around the world should ensure the goals of economic development particularly to reducing poverty and inequality are well balanced between the goals of economic growth so that the future generations can equally enjoy a good life if not better than the current generations.